EA SPORTS celebrates the world's largest sporting event with the only official and exclusive licensed videogame for the 2006 FIFA World Cup Germany and the only one that matters.
2006 FIFA World Cup perfectly captures the emotion and passion of the world's fiercest national rivalries by giving users the opportunity to play with their heroes and the chance to win the FIFA World Cup.
Play as your home nation and control your favorite players as you battle from qualification right through to a virtual re-creation of the final tournament in Germany. 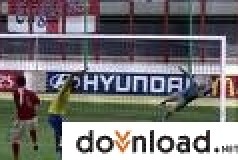