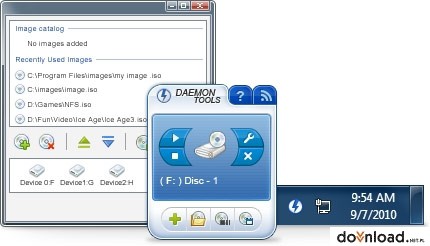 Tired of shoving discs in and out of the tray? Daemon Tools Lite is a free tool that enables you to create and burn disc images and set up virtual DVD drives that work just like physical optical drives – only a bit better. It's one of the most advanced and comprehensive applications avalaible for Windows. Apart from just emulating it compresses disc images, enables password protection and much more.

Though its user interface is intuitive and almost plain, behind its simplicity is hiding enormous functionality and efficiency. With just a few clicks you can emulate either DT virtual devices (basic ones) and SCSI virtual devices that help to deal with highly secured discs of games, programs, etc. There is an impressively long list of supported disc images: cue/bin, ccd, bwt, iso, nrg, cdi, mds, pdi and b5t. The program also features the usage of shortcut keys.
Daemon Tools Lite is free for personal use, but commercial users have to pay a fee. More emulated drives, compression, creation of images and the GUI are covered by a pro version. During the installation the program want to include additional toolbars, so check out to opt out of it.

However, the program has numerous advantages and it's a great choice for both owners of netbooks that have no physical disc drives as well as those who want to either save their notebook battery or are simply tired of using standard discs. 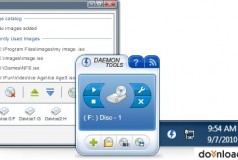 How to get Windows XP legally and for free?