How to check which games will run on the Steam Deck.

Related: The Reason For Slow Steam Cloud Sync and How to Fix it.

Steam Deck is Valve's flagship mobile console that took the world by storm when it was announced at the end of 2021. At first glance, it looks like a masterwork of hardware and claims to allow users to play most of the games in their current and every growing Steam library. However, there are some titles that aren’t going to make the cut. So how exactly do you determine what games will or won’t work on the Steam Deck? As officially quoted by Steam:

"We’ve already started reviewing titles and will continue to check games through launch and beyond. This is an ongoing evaluation of the entire catalogue and a game's rating can change over time - titles will be re-reviewed as the developer releases updates or the Deck's software improves.”

Some could be compatibility issues with Proton and SteamOS. While others that rely entirely on mouse and keyboard will make compatibility impossible. This is to be expected from a handheld console though, but Perhaps Steam will add wireless keyboard and mouse support at some stage to counter this shortcoming.

How do you check which games you can run on Steam Deck?

Verified games have been tested by Valve and will run great on the Steam Deck and don’t require extra work on your behalf to start playing.

Playable games will work but can require some changes or adjustments on your part. What these changes and adjustments are will depend on the game you are trying to play.

Unsupported games won’t work but they will be accessed and potentially tweaked to work at a later date. Of course, there will be a list of games that will never work on the Steam Deck so you need to be aware of that.

Untested games are games that Valve hasn’t yet got around to checking and testing. Which is a huge portion of the current Steam library. As the Steam library is absolutely gigantic it will probably take them a while to get through all of the games on the list. 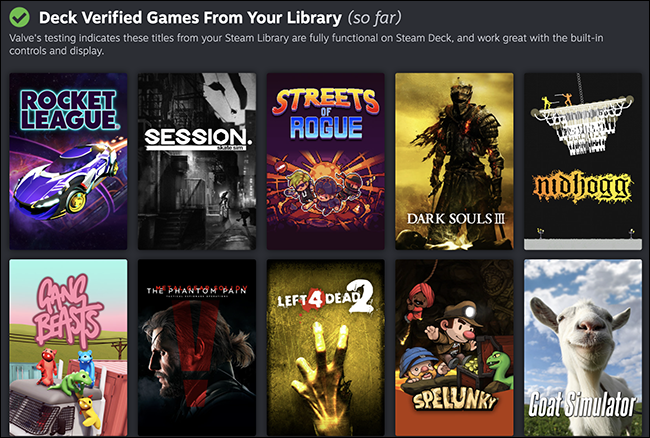