How to fix a laggy brush tool in Photoshop.

If you are using Photoshop and have noticed that your paintbrush tool is now lagging behind your mouse movements. This article will show you how to quickly and easily solve the issue. Interestingly enough you’ve probably just pressed the wrong key combination and changed a setting to cause the issue. There isn’t actually anything wrong with Photoshop.

Adobe software is some of the most powerful software currently available for photo and video editing. The only problem with it is that it is rather unreliable sometimes with an assortment of issues that plague Photoshop, Premiere Pro, After Effects and all the other inclusions of the creative bundle. While a lot of these issues can be solved with some troubleshooting they usually take a fair bit of time to diagnose.

However, one of the more common issues that affect Adobe software, particularly Photoshop, is "the accidentally pressing of shortcut keys" when working (user error). While this isn’t really an issue for power users, it can be a problem for novice and amateur users who don’t quite know what they have done or how to restore things back to normal. The most common of these issues is changing the parameters of the brush tool in Photoshop causing it to lag behind your mouse whenever you use it. So how exactly do you solve this problem?

Everyone who uses Photoshop will eventually come across this issue and most of the time it causes users to either reset Photoshop settings to default or completely uninstall and reinstall Photoshop. Thankfully that isn’t required, though it does solve the problem pretty quickly. Instead, here's how you actually solve the problem of a laggy brush tool in Photoshop. 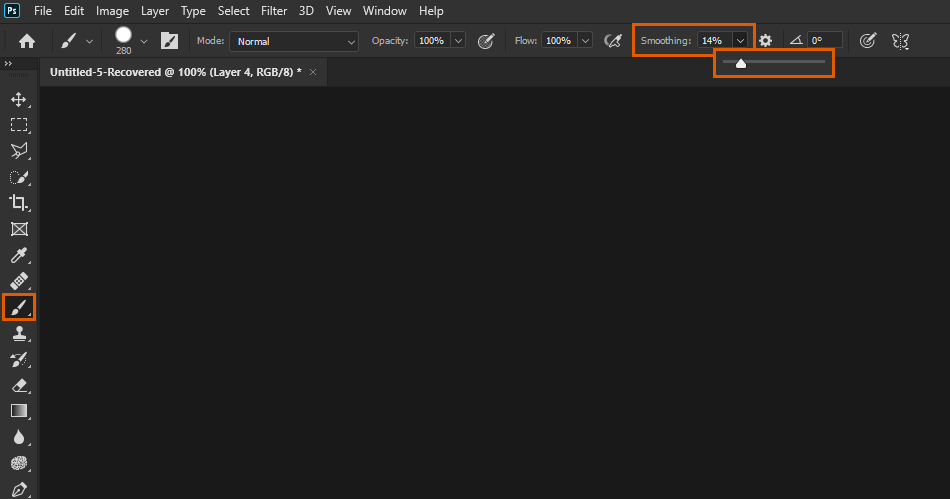 That’s all there is to it! Smoothing is a handy option for some situations however it does cause major lag with the brush tool and requires a super high-end computer to use on 100% smoothing without any lag. However, you probably won’t even notice all that much difference in smoothing levels between 100% and 30% anyway. If you find that this keeps happening it is because you are accidentally pressing the keyboard shortcut combination. Don’t worry it happens to all of us at some stage.

If you are also using Adobe Premiere Pro or are just having .dll issues with Adobe software?!

Another common issue that is bound to pop up at some stage and cause you issues are missing .dll files. Oddly enough there are some common Windows .dll files that all Adobe software relies on which occasionally get removed by Windows updates. The good news is that the problem can easily be solved and we’ve already created a guide for it.