As the Opera web browser is one of the most popular programs of this kind, it gathers now more than 300mln users, and there are some substantial changes to its core.

While it always used to be a sort of an outsider in the market of the desktop browsers – with just 1.47 per cent market share, it's hard to call it exceedingly popular – it has many users a a browser for mobile phones and smartphones. 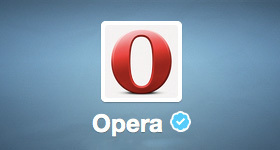 Opera Software announced that they reached a major milestone, having 300 millions of users around the world. With this considerable achievement come also some substantial changes for the rendering engine of the browser. The CEO of the company, Jars Boilesen, informed that future releases of the browser will move on to the WebKit and Chromium engine, used by Google's Chrome browser and Apple's Safari. It means that Opera Software will abandon its own Presto rendering engine, which they have been using all these years.

As it was pointed out by Hakon Wium Lie, Opera Software's chief technology officer, “It makes more sense to have our experts working with the open source communities to further improve WebKit and Chromium, rather than developing our own rendering engine further.”

Later this month, the company has plans for demonstrating its upcoming Android browser during the World Mobile Congress trade.

How to enable Quick Actions in Firefox.