Winstep Nexus Dock is a highly-customizable dock system designed to create an eye-catching launcher on the desktop with the direct access to your favourite apps on the fly. It is perfect solution for those who are in favour of Window’s task bar and want to customize the interface according to their style and preferences. The application packs a stupendous amount of themes, widgets, options and allows fast access to Windows features. It can even act as a replacement for the task bar.
What makes it stand out app is the customization level it provides. It allows users to basically adjust every single detail of the doc. Users can easily change the icon size, change the theme, not to mention reflection and sound. In addition, it offers a wide range of magnification and mouse over effects. Another great feature, Winstep Nexus comes with, is the ability to  run indicators that will let you know which programs are running.
The pro version is also available, which slightly richer in options and features. Some of them include the ability to create multiple docks, nest docks, create shelves, and do much more. Bu the free version will be suitable for regular users, though.

The latest revamp of Nexus Dock seems to be a little bit faster and more functional, featuring tons of new effects, along with touch-screen support, better laptop compatibility, and a wide range of fresh widgets.
All in all, Winstep Nexus is a great utility of its kind, that can be used either as an app launcher or a useful taskbar replacement. 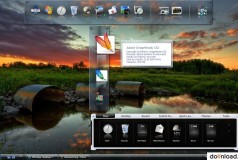