If you are using Windows 10 or 11 and need to connect to a VPN to do whatever it is that you do. You may recently be encountering the following VPN error message: "You can connect us with VPN Name. The L2TP connection attempt failed because the security level encountered a process error during the initial negotiations with the remote computer”. If so, follow along as we guide you through several troubleshooting steps, this isn’t the first time that Microsoft has caused problems with VPN connections.

Another day, another update, another VPN connection error on Windows 10 & 11. Microsoft surely are consistent when they are breaking things! The latest issues with VPN connections on Windows 10 and 11 brings up the following error message when you are trying to connect to a VPN, primarily L2TP connections though it does also affect all other VPN types as well. So what exactly happened?

It seems that the latest cumulative security updates from Microsoft for Windows 10 & Windows 11. Specifically, update KB5009566 for Windows 11 and KB5009543 for Windows 10 have introduced the issue. This isn’t anything new as cumulative updates are where most problems seem to come from. The error message reads as follows:

"You can connect us with VPN Name. The L2TP connection attempt failed because the security level encountered a process error during the initial negotiations with the remote computer." 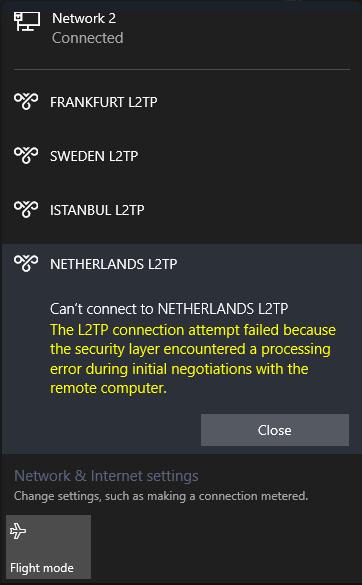 So far the only solution for this problem is to uninstall the Windows update that has caused the problem. Which is thankfully a relatively easy process. You can check out our video guide below, or skip down a little further to follow the text guide. The choice is yours!

How do you fix L2TP VPN security level errors on Windows 10 and 11?

Note: If you have left uninstalling the update for too long or have removed all the old Windows information from your computer using Storage sense, you won’t be able to uninstall the updates. You’ll just have to wait for Microsoft to send out a new update with the fix.

I would now suggest pausing Windows updates moving forward. You can only skip 7 days at a time so you might have to do this a couple of times. Otherwise, you’ll have to uninstall the update again when Windows automatically updates in a weeks time. You can find the Pause updates for 7 days options under Settings > Windows Update. It’s near the top of the list so is quite easy to find. If you have other VPN issues on Windows we have plenty more Windows 10 and 11 VPN connection guides.