Spotify offering free mobile streaming service in the near future?

According to the report from The Verge, Spotify, streaming music service, is reportedly in negotiations to boost the amount of music it offers for free streaming to smartphones and tablets.

At the moment, the company charges Spotify users £9.99 Premium subscription letting them play tracks on mobiles and tablets after a free 30-day trial. Could that soon change?

There are several benefits of free music streaming: you could trail full tracks on your iPod without signing up for a Premium subscription and keep tons of tracks on your device without wasting your device’s storage as the files are loaded directly from the cloud.

The free service, which will come with audio ads, will probably be a way for Spotify to entice people to sign up for a paid subscription, which strips out the annoying ads and enables users to choose songs. Moreover, its free offering would gain an edge on its streaming rivals, Napster, Rdio and Deezer.

As The Verge announced it the report, Spotify, one of the most popular music subscription service in Europe and other regions, is expected to meet in the coming weeks with major music companies in the record industry to renew their licensing agreements. The Verge has learned that, Spotify managers has already entered talks with Warner and will start negotiations with the other two major music companies, Sony and Universal, in the coming weeks. Even though, Spotify isn't confirming or denying the report. 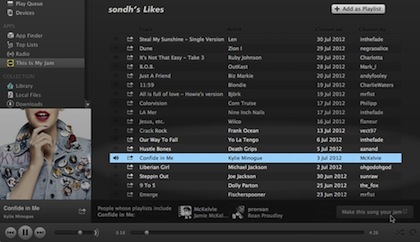 Spotify representatives are expected to ask for smaller profits for the artists along with the rights to share music for free on mobile devices.

Spofify has recently received a bailout of one hundred million dollars, which may make it difficult to negotiate a reduction in royalties. One of the strongest argument for this agreement is a need for Spotify to gain more profitability for their services. At the moment, Spotify has five million subscribers and 20 million users. According to the report, 70 percent of the revenue is transferred to the copyright music owners, 20 percent to attract new customers, while 10 percent goes into the Spotify pocket to cover the technology which runs the company. That is why Spotify is suspected to be operating at break even.

The relationship between the streaming music services and the artists seems to be complicated as the artists constantly complain about the extremely low payments made for the right to stream their music, especially when comparing to iTunes or Amazon. As a result, several major artists, like Coldplay, Adele, and Taylor Swift decline to allow their music to be streamed by Spotify.

Last year, Spotify started to stream free music to iPhones and iPads in the US thus offering unlimited songs and stations alongside advertising. Unfortunately, complex licensing arrangements made it unable to launch this service in other countries – but a renewed pressure in the coming negotiations can make it possible to see free subscription on mobile devices offered to music fans in Europe.

How to get the most out of your Midjourney GPU minutes.