Your PC is about to crash: 8 common symptoms

In a majority of cases you can foresee an upcoming crash of your operating system or computer components. All you have to do is to keep an eye for subtle signals that you computer sends you. This way you can avoid unpleasant consequences, such as losing important files.

The first thing to keep an eye for are hardware conflicts. They appear when two components are trying to use the same system resources. This results in the Blue Screen of Death and incorrectly working applications (for example no audio).

It's quite easy to detect hardware conflicts. You only have to go to the Device Manager (right-click on the My Computer icon, choose "Properties" from the context menu, and click on "Device Manager" on the left panel) and check if there is an exclamation mark next to any element on the list. To completely solve that problem you have to re-install the driver - it's best to completely remove it from the system.

If it doesn't bring any positive results you have to simply disable the troublesome component and enable it only when you need it - remembering to disable the other device that is mixed into the conflict. If you need both devices you have to re-install your system.

Another easily recognizable symptom are read and write errors. They can be caused by malware infections - you should scan your whole hard drive with an anti-virus application. Another possible explanation is a dying hard drive. It should by analyzed and formatted, and in some cases - replaced with a new one once you have made a backup. 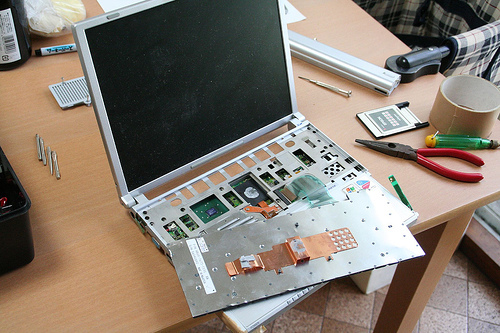 Another alarming issue are strange sounds produced by your hard drive. They may also mean that your HDD is dying. You can obtain extra information by using a program such as CrystalDiskInfo. You may have to format some partitions or replace this component.

Number four on our list our boot errors which are often the effect of lack of comunication between the system and the key components of your computer, such as HDD or RAM. The first step you should take is re-installing Windows, another step - replacing the failing component.

Another issue is undeniably poor performance. If the computer takes ages to boot and programs don't want to load you may want to clean your system using an application such as CCleaner. However, it is beyond any doubts that re-installing Windows, although time consuming, is also much more effective.

If your Ethernet connection is failing, you should use the tool for solving connection problems - you can find it by right-clicking on the Wi-Fi icon in the system tray. Additionally you can check for hardware conflicts in the Task Manager.

Number 7 are the problems with display, such as artifacts. These are lines and colourful blocks that appear on the screen when you are playing or watching a movie. They may be caused by a failing GPU. You should clean it or, if it doesn't bring any results, take it to a service or replace. The same can be said about the eight problem - a loud CPU fan. You should clean it and apply thermal cooling paste onto the CPU.