If you are trying to play games from the Xbox app on Windows 10 or 11 but keep getting error 0x80242020 preventing you from performing downloading, installing or launching a game. This article will show you several different things you can do to fix error 0x80242020 and start playing games from the Xbox app again. Alternatively, you can also use the steps shown in this guide to solve the same error in the Microsoft Store.

Related: How to use the new Xbox Game Bar Controller Bar on Windows 11.

The Xbox app on Windows 10 & 11 is one of the most basic, yet frustrating apps on the entire operating system. It’s been around for quite a long time and is home to Microsoft’s entire gaming package which includes Game Pass. Although it is fantastic when it is working properly, it rarely wants to work properly which is the main issue.

Thankfully a recent update gave the entire Xbox app an overhaul, which addressed some of these issues, however, there are still plenty of Xbox/GamePass issues that Microsoft needs to solve. To date, we’ve covered most issues which you can check out here. But we are once again adding to our collection of guides with one covering Xbox app error 0x80242020. If you are getting this error message when you open the Microsoft Store as well, you can use all the same steps shown below to solve the problem.

Note: Before you start the steps shown below, check to see if there are any Windows updates available. There’s always a chance Microsoft has patched the problem.

One of the quickest and easiest ways to solve this problem is to repair or reset the Xbox app on your computer. First, try a repair, then follow it up with a reset if repairing doesn’t work. If you aren’t sure how to do this, follow the steps shown below. 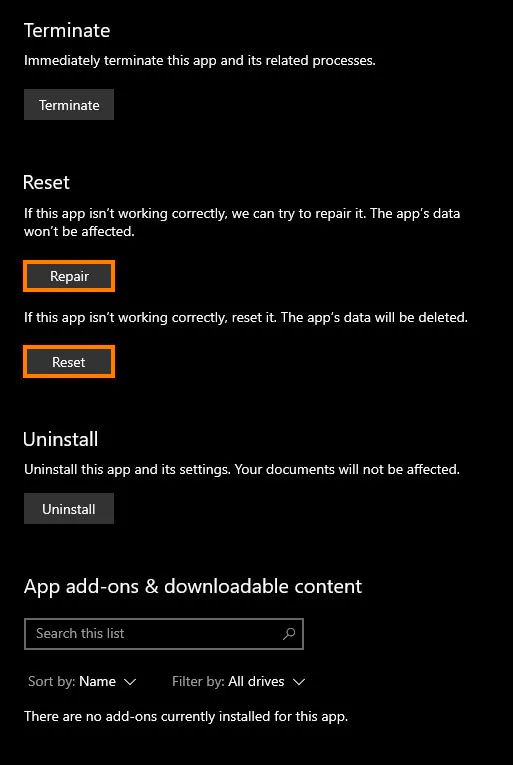 Clearing the Windows Store cache is also a good idea as it will remove any corruptions that may be causing this error message. If you haven’t done this before the steps are below.

After the cache has been cleaned you should be able to use both apps normally again.