If you have been following the Windows 11 leak and would like to get your hands on the entire list of wallpapers. This article will show you how and where you can download the entire Windows 11 wallpaper library in full 4k quality. I’ll give you a little clue! We’ve got the stash for you!

Related: How to set a maximum volume for devices on Windows 10.

Rumours of Windows 11 have been doing the rounds online for at least six months now with most of the debate focusing on Microsoft’s official naming decision. As of a couple of days ago though, the answer to that question has all but been answered with Windows 11 leaking to the world via China. At first glance, Windows 11 looks sleek, minimalistic, and incorporates a lot of design aspects that users usually acquire for themselves by default.

The option to have a centralised start menu and taskbars is probably the most noticeable change we’ve seen from Windows 11 so far but this isn’t anything unexpected as Microsoft has been paying close attention to trends this time around rather than going with entirely new concepts. You’ve probably also noticed that the new wallpapers on Windows 11 have a modern almost iOS feel about them which is another hint in the direction Microsoft may be taking their flagship OS.

Seeing as this leak was of the full Windows 11 installation ISO it’s now possible to download the entire Windows 11 wallpaper database in 4k quality. Seeing as we’re a good bunch here at Downloadsource.net we’ve decided to whack them all into a zip file download for you. 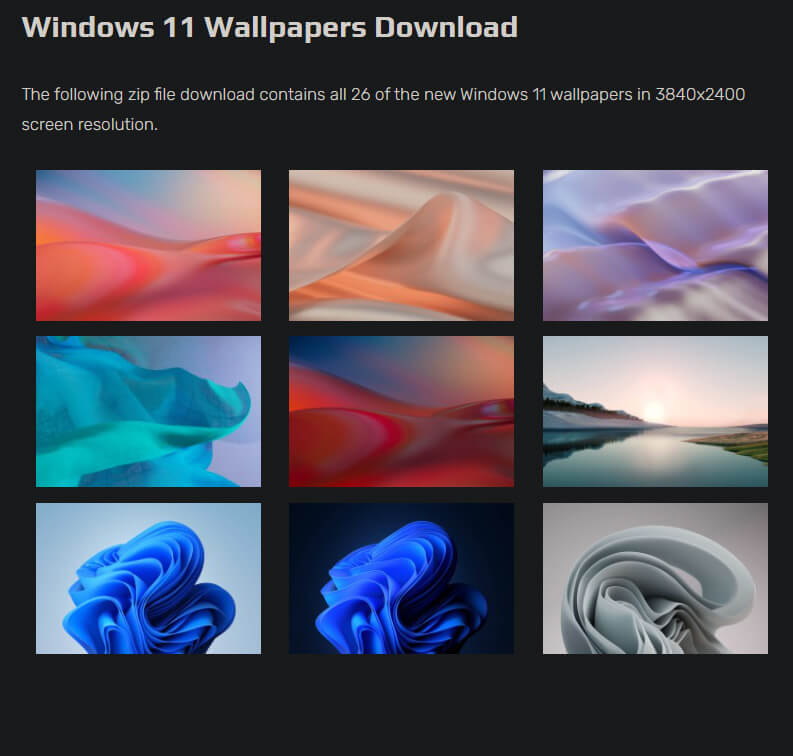 What else is new in Windows 11? Windows 11 changes.

Apart from the few obvious things we have seen from the Windows 11 leak, so far most of the changes have been cosmetic and only seem to be surface-level changes at this stage. The further you dive into Windows 11, the more you notice that a lot of panels haven’t changed at all. For example, most of the interfaces surrounding the Control Panel remain exactly the same as they have for the last decade.

Below you’ll find a shortlist of the current features changes that have been uncovered so far.

So far Windows 11 looks to be little more than a cosmetic upgrade for Windows 10 but we’ll give Microsoft the benefit of the doubt until their official press release and announcement. I don’t know about you guys and girls but I’m keen to see more information about gaming on Windows 11. Will it be an even better experience? What do you think?