If Firefox is your main Internet browser, you’ll be happy to know that it now has full translation support that still protects your privacy. How? Well, Mozilla has come up with a system that doesn’t require the cloud to perform translations which is a major step forward for privacy-focused users who hate their data being moved around. So how exactly does it work? Let’s find out.

Related: How to fix OBS Studio error Failed to connect to server.

Firefox is one of the best, yet underrated Internet browsers on the market. It’s fast, easy to use, has tons of extensions and most important of all, it actually cares about user privacy, unlike a lot of browsers. Up until recently, however, Firefox’s biggest issue was its lack of native translation tools. Thankfully, that has finally been resolved! So if you’ve been avoiding Firefox because you need translate, you can finally switch!

Traditionally, translation services in browsers rely on remote servers and cloud-hosted AI frameworks to translate content. However, unlike Google Translate, Bing Microsoft Translator, DeepL Translate and all the other online translation services. The Firefox Translation algorithms work entirely offline. This means that the entire process is done client-side (on your PC) using the system CPU (SSE4.1 extension support is required though) to ensure that the text being translated does not leave your device.

At this stage, Firefox Translate requires an extension to be added however it is an official one. The only other catch is that there are only (at the time of writing) 10 languages available. Spanish, Estonian, English, German, Czech, Bulgarian, Portuguese, Italian, French, and Polish.

How do you use Translate in Firefox? Firefox gets official privacy-focused Translation tools.

As we mentioned already, you will need to add the official Firefox Translate extension (add-on) to Firefox which you can grab from the link below.

Once you have added it to Firefox using it is super simple, though it is limited to a few languages for the time being. So keep that in mind. Whenever you visit a website that is in a different language than your browser's default you will see a new bar across the top of the website with translation options.

Here you will see all the options currently available to you. If you want the page to translate click Translate. If you want to enable additional features like form translation or error highlighting place a tick in the respective boxes. On top of this, there is also an options menu in the right corner which gives you several more options that you will already be familiar with from other translation services. 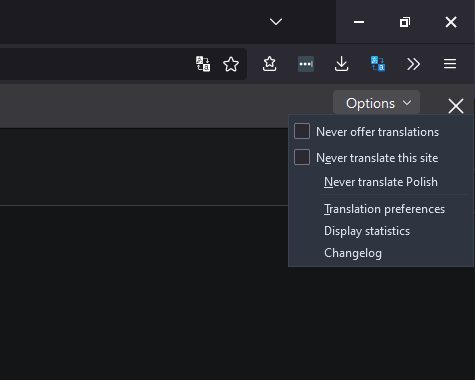 As soon as you click the Translate option Firefox will translate everything on the page including the sub-menus (something that Edge/Microsoft has trouble with). You will also see another new option in the top right-hand corner that asks if you want this tab to be automatically translated as you browse.

As the entire translation process happens locally using your computer's CPU rather than your Internet connection and the cloud the speed at which it translates may vary. Faster CPUs will get the job done nearly instantly, however, slower ones may take a few seconds.