Windows Live Messenger was previously known as MSN Messenger, but it remains the world’s most popular instant messaging software allowing users to share folders and files locally with their friends. It also comes bundled with animated emoticons, winks, and buzzes, as well as with multiplayer gaming, free PC-to-PC calling, mobile phone messaging, and video chatting.

Windows Live Messenger presents itself with a friendly and intuitive interface so it can be handled by wide audience. Among the best things about this application is that it is linked with the most popular social networks like Facebook, LinkedIn or MySpace, what allows users to access new posts from their friends within the same interface.

When it comes to sharing files, one can easily and effortlessly send files to friends using drag and drop option from the so called ‘Sharing Files’.

Windows Live Messenger displays loads of advertisement banners at the bottom of the messenger’s main window and chat windows. Unfortunately, there is no way to get rid of them which can be annoying especially when you click accidentally on any of these.

All things considered, we recommend Windows Live Messengers as it is extremely easy to use application, brings pleasant and user-friendly interface while packing tons of advanced features. It constantly follows the latest trends as its competitors thus incorporates modern communication options including video chatting, file transfer and phone calling. 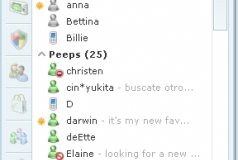