How to check for nearby AirTags using an Android phone.

If you are worried that someone may be tracking you using an Apple AirTag but don’t have an iOS device to check. This article will show you how to check for AirTags using any Android device. This will allow you to check for certain that you aren’t being tracked using an AirTag.

Related: How to set your Android phone to switch to silent mode when on charge.

Apple AirTags have been released with the usual amount of hype and fanfare from the apple community. On paper they are a super useful, relatively cheap device that you can use to track and find lost or stolen items, however, they can also be used as a cheap way to stalk and track people without their knowledge.

If you own an iPhone this isn’t much of an issue as you will get an alert that an AirTag is following you. But for Android users, you won’t find out until the AirTag starts beeping 3 days after it was activated. Thankfully if you are worried about someone tracking you with an AirTag there is a quick and easy way to check for AirTags using your Android Phone. It’s not a perfect system but it’s good enough to get you searching harder.

Since Apple AirTags work using Bluetooth and nearby Apple devices, it’s possible to spot them using a Bluetooth scanner app. This won’t point them out entirely but it will give you enough information to determine that there is probably an AirTag very close (within Bluetooth range).

To find any nearby Apple AirTags using your Android device, you’ll need to head on over to the Google Play Store and download a Bluetooth scanner app. You can choose any app you like, however, we’ll be using LightBlue.

Once you have installed LightBlue or whatever Bluetooth scanner you want to use, open it and you will see a list of devices around you that are using Bluetooth. Unfortunately, they won’t all appear with easy to read and identity names, so you’ll need to do a little bit of investigating. If you live in an apartment complex you’ll probably see a ton of devices but you should be able to narrow them down based on their signal strength. Bluetooth doesn’t broadcast all too strong.

At the moment AirTags appear as “Unnamed” devices but this may change with future updates so keep an eye on this. Whenever you see an unnamed device tap on it to view the manufacturer-specific data. This will show you if the device is an Apple device which is usually a good sign that it’s an AirTag. Though it’s possible it could be another Apple device. If you are like me and have a pretty good recollection of the usual nearby devices in your area, you will probably spot anything unusual pretty quick. 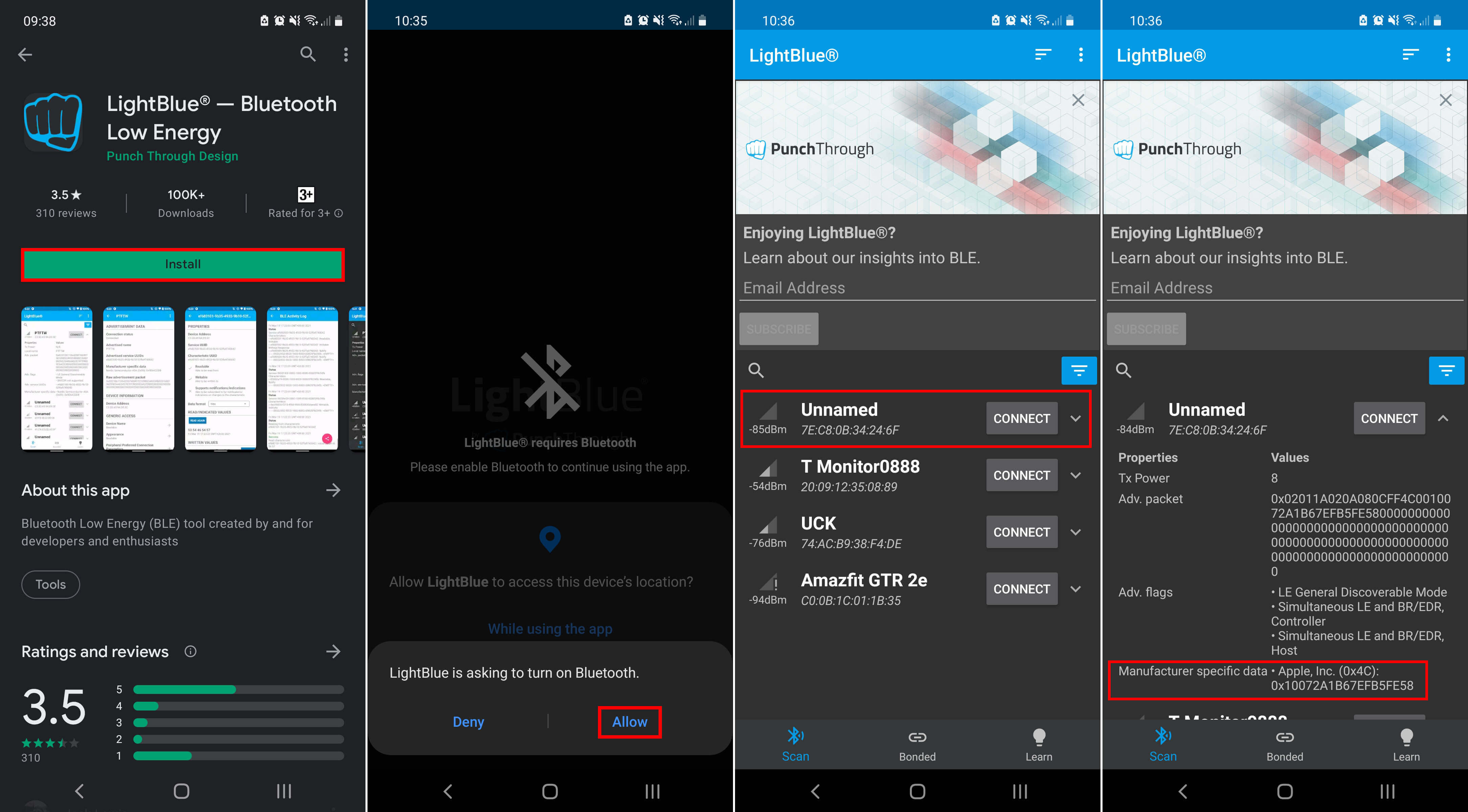 Once you have established that there is probably an AirTag close by, you can start to track it based on its signal strength. The stronger the signal the closer it is. So start checking the pockets in your bags and coats. It’s also a good idea to check your car or bike if you are concerned you may be being tracked by an AirTag.

The best way to do this is to drive to a place that is less likely to have any Bluetooth devices nearby. However, if you are doing this it’s a good idea to make sure you aren’t alone, you don’t want to be stalked to a remote location and get caught alone..

What do you do if you find an AirTag? Scan it with NFC.

If you do find an AirTag that is in Lost Mode and is tracking you, you can scan the white side of the AirTag with NFC. This will bring up any contact information and messages the owner has set. Though I doubt that anyone who’s using an AirTag like this will have given you all their information.