Why you shouldn't use a memory optimizer

You may not believe me, but memory optimizers can do you more harm than good. In fact these programs will most probably slow down your computer instead of boosting its performance. Your PC knows how to manage RAM and it doesn't need any third-party software to stick its nose into its business.

Let's take a look at the Task Manager. 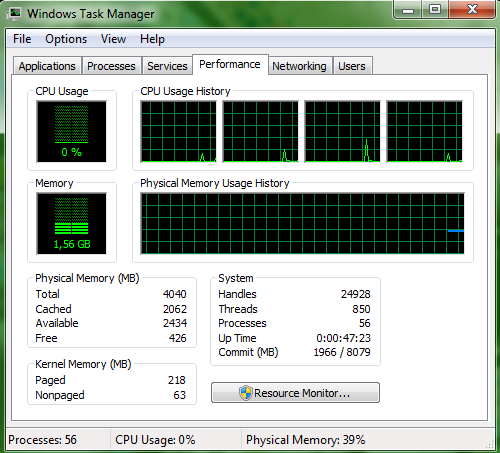 First of all, let me assure you that there is no point in your PC having ANY free RAM, because it doesn't make a difference to your computer, really. If your RAM is full, the system will simply discard the data that has been cached already to make space for necessary services. And when there is a lot of cached data it most probably speeds up the applications you are currently using since the most often accessed data is kept in RAM. (Remember, hard drives are the slowest components of our computers.)

So what these memory optimizers do?

You can see RAM usage go down once you have "optimized" your system (otherwise there would be no point in selling these applications to some naive users), but it's done in a very artificial way. Basically, these programs either make running applications write their data (working memory) to the Windows page file instead of RAM (by forcing the EmptyWorkingSet Windows API function), or they make the system think that the optimizer requires a lot of memory so Windows has to overwrite that cached data and give it to the program. Once the optimizer gets its RAM, it deallocates it to make it look free.

Both ways bring you more harm than good - now you have a lot of free RAM, but it also means that programs have to collect all the data again and cached RAM will soon appear again. And in the meantime you can expect all the applications to slooow dooown significantly.

What can I do to really "optimize" my memory?

Instead of stuffing your computer with bloatware - memory optimizers, for example - you should take all the steps that lead to improving your PC's performance:

3. Buy some extra RAM (check first how much and what types does your mother board support).

How to change the page that Task Manager opens on in Windows 11.

How to fix no startup items appearing in Task Manager.

How to open the Microsoft Edge Task Manager.