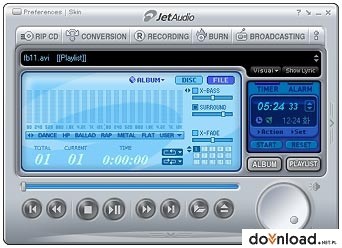 Jet Audio, apart from its main function of playing video and audio files, provides users with a bunch of other useful tools such as the opportunity to rip CDs, listen to online radios, or record sound.

Additionally, what makes it a stand out is the capacity to get detailed information about artists, their albums and so on. What is also worth mentioning is the fact that Jet Audio Basic works with majority of popular formats. It is also equipped with tools for converting formats like: FLAC, OGG, VMA, WAV, MP4, FLV and more. What is more, there is an extensive choice of skins that enables you to change the player’s appearance according to your style and preferences. When listening to music, one can add some visualization or sound effects.  When you use it for the first time, the Jet Audio Basic scans your PC in order to find all media files.

The interface’s look is undeniably attractive, but the numerous functions make the layout a bit crowded. As a result, when approaching it for the first time, it seems to be quite complicated and you may find it hard to work with it, but as you spend some time mastering it, it proves to be user- friendly.

All in all, Jet Audio has an attractive list of features. Although its interface is not so intuitive and may give the impression of being designed for only advanced users, it definitely deserves paying attention to because it is not a mere music player. 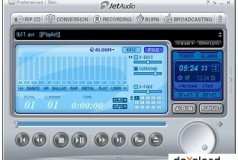