How to Get Opera GX. A Browser Specifically Designed For Gamers & Gaming.

If you are an avid gamer or streamer and always make sure to close down as many programs as you can before firing up a game. This article will introduce you to a brand new alternative browser designed to use far fewer resources, so you can leave it open while you read through guides and play games or stream gaming content over Twitch. 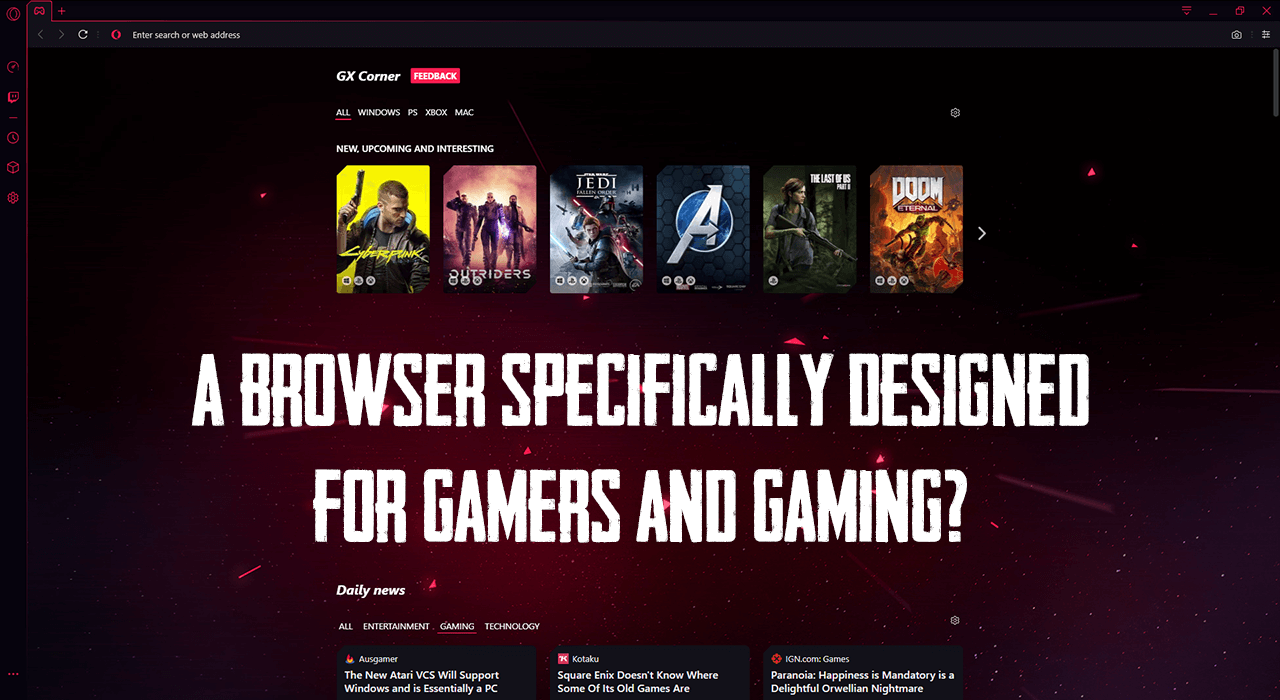 How to Enable Gyroscope on Call of Duty Mobile. (COD Mobile Gyro)

These days Internet browsers use more system resources than most other apps and programs on your system combined and can quickly cause stability issues on older machines if you open too many tabs at once... Chrome, Firefox, Opera, Brave, and even the new version of Microsoft Edge running on the Chromium engine are all prone to this and sadly there’s isn’t much that can be done about it.

For gamers, having a browser open is performance suicide and something most hardcore games won’t even consider. Instead relying on a separate system for all their browsing and streaming requirements. For the average user, a phone or tablet is the go-to device for this!

All that said! Things may be about to get a whole lot more interesting with a brand new browser from Opera now in beta that specifically targets the needs of gamers. The new browser is called Opera GX and has the sole purpose of serving gamers needs without using a huge amount of resources. In fact, you can even allocate how much of your system’s resources it’s allowed to use. So without further adieu, let’s look at some of its features in a little more detail and show you where to download it.

What is the Best Browser For Gaming and Streaming? Opera GX!

Before installing Opera GX on my Windows 10 system (1903) I was quite sceptical of Opera’s claim that Opera GX would use considerably fewer system resources than every other browser on the market. However, after installing it and comparing it to Chrome and Firefox, it’s easy to see the difference with a simple check using the Windows 10 Task Manager... With a bare-bones installation, it was using an easy 40% less ram, though this was before installing LastPass and Privacy Badger. But even after installing a few extensions Opera GX still uses far fewer resources, than Chrome, Firefox, Edge, and Brave.

That isn’t the best part about Opera GX though! The game-changing thing about Opera GX is that it allows you to manually set your own custom resource usage limiter. Which means you can restrict Opera GX to a max % of your system’s RAM or CPU. At this stage, there are predetermined percentages so you won’t be able to drop ram usage down to 100mb and expect the browser to function normally, but you can choose from 4gb, 8gb, 12gb, 16gb, etc. The same can be done with CPU usage with increments of 25%, 50%, 75%, 100%.

Although most other browsers are pretty good at giving you customization options, Opera GX has gone the extra mile and tailored GX to gamers. With a very much RGB like interface and an almost endless range of colour options. As well as this, it’s also possible to add your own custom wallpapers (including video wallpapers).

However, the best addition in this category is the News Feed which is 100% games and gamers based. Showing a range of content from the world's biggest and most popular gaming news sources. Naturally, you can switch over to normal news if you like but gaming is the default! Opera GX also shows a list of new, popular, and interesting games from the homepage so you never miss out on hit titles.

Even though it’s in your best interest to limit how many extensions you use with Opera GX for obvious reasons. GX is compatible with any and all Chrome extensions, so you shouldn’t have any issues finding or adding extensions should you choose to do so. It’s also important to note that Opera GX comes with an ad-blocker as standard (not enabled by default) so you don't have to add another ad blocker.

At this stage I can’t find much to gripe about with Opera GX, but in all honesty, I haven’t been using it long enough to find any bugs, glitches, or hang-ups. For a beta release though, it’s pretty damn stable and surprisingly fast. If the attention to detail that has gone into GX so far continues, it’s going to be a damn good browser!