Darksiders Genesis is one of the best local split-screen co-op games currently available on PC and console and although it is a few years old it holds its own as a fun game to play while chilling with friends. The only problem with it is that finding and using split-screen coop is anything but easy or convenient. In fact, it's pretty much the most absurd way I have come across to date to start a local co-op game.

Judging by the fact that you’re here, you’re probably thinking the exact same thing, so I feel your pain. But before we start the guide I want to mention another important thing to take into account when playing split-screen co-op in Darksiders Genesis. And that is that progression doesn’t save as it does in traditional games. If you start a co-op game in Darksiders Genesis and end it, it won’t save your progress as a two-player game, you will have to follow the same process shown below to start a co-op game again. As you’ll see it’s quite inconvenient...

How do you start/play a local split-screen co-op game of Darksiders Genesis?

To start a local split-screen co-op game in Darksiders Genesis, you’ll need to do the following. I know it's going to seem weird at first but I promise you this works! First, connect a controller or second controller to your device. Then start a new game or resume a saved game as you normally would. When you are in the game, find and locate a summoning stone. They are pink/purple and allow you to call in another player. Check out the image below for the exact thing you’re looking for. 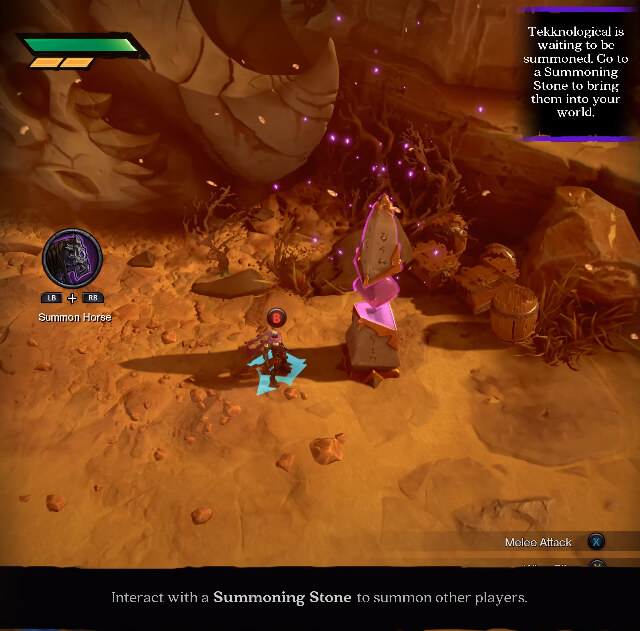 If you are just starting out, you’ll need to walk a little way into the map before you’ll be able to find one. Once you find one, interact with it and the second player will be able to press a button on their controller to join the game. From here on out is business as usual and you can coop till your heart’s content.

So what happens when you finish a game session that you were playing as coop? Well, you have to follow the exact same process you used the first time… For whatever reason the game’s save file doesn’t register that you were playing with two people so it automatically reverts back to one player mode. Thankfully, all you have to do is find another summoning point in order to invite a second player again. Annoyingly though, this might not be in the closest location, so you’ll have to go for a little hunt to find one.

I’ve been playing games for a long time and this is by far the most stupid coop starting system I have come across. That said, the co-op gameplay of Darksiders Genesis is pretty good and should keep you busy for a long while. But! You’ll probably get into a few arguments along the way! Some bits can be a little tricky!