If you are currently playing Apex Legends on PC and can’t seem to get the game to maintain a smooth frame rate of 60FPS. This article will show you what is potentially causing the issue and how to get around it. Hopefully, an official patch addresses the issue soon but until then this solution will have to do. 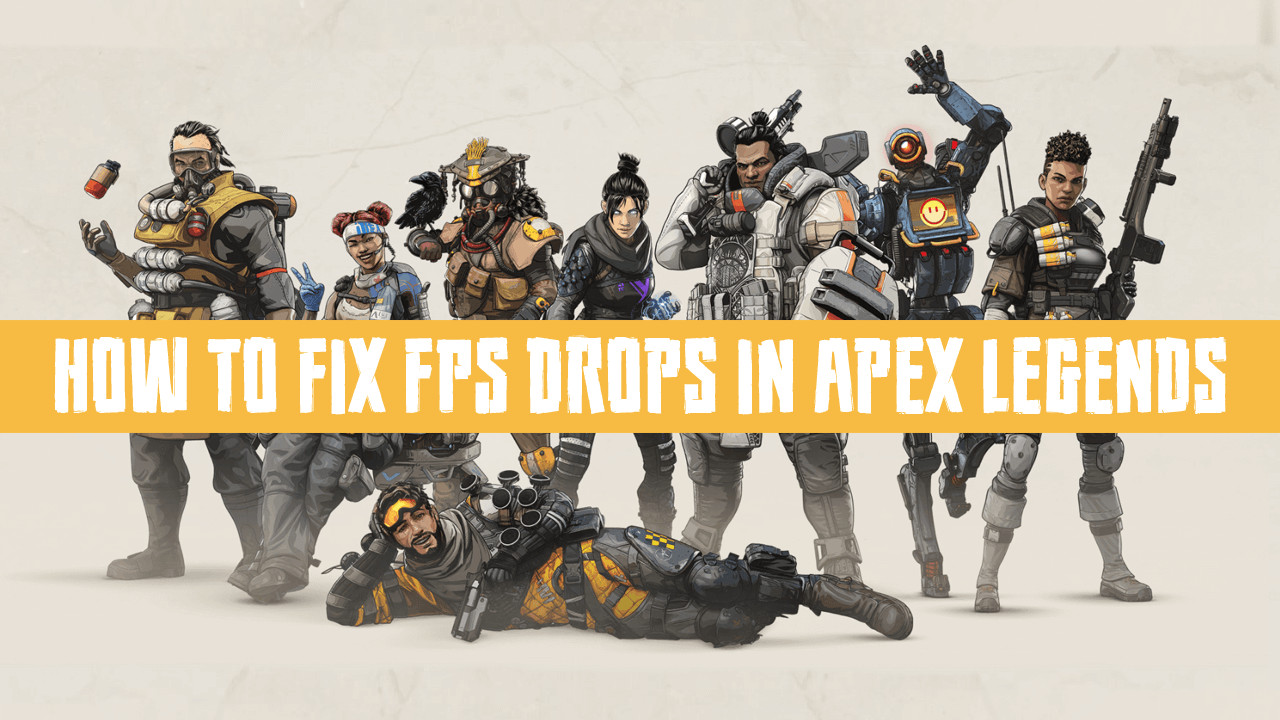 Apex Legends has been going gangbusters since its release just over two weeks ago and has already become the most streamed game on Twitch. As massive and issue free as the launch has been, there are a few issues that are now starting to appear with the game's performance. Apart from random game crashes without error codes and some server issues, Apex Legends has a massive issue with FPS fluctuation.

Even players using top end PC’s are noticing that Apex Legends has a hard time consistently holding frame rates at or above 60FPS. Although Respawn are currently working hard on performance fixes and improvements, there are a few things you can do to fix Apex Legends massive FPS inconsistency problem.

Related: How to Mute Teammates and Players in Apex Legends. (Xbox, PC, PS4)

To address the issue of fluctuating frame rates in Apex legends there are a number of things you need to do. First of all, you need to make sure you aren’t using the Adaptive Resolution FPS Target feature in Video Options. This feature seems to have the opposite effect on frame rates and overall system performance. For example, I had this enabled and locked to 60FPS with everything else set to max and the game barely made 40FPS. I was hoping to keep the game stable at 60 rather than bouncing around between 60 and 100. 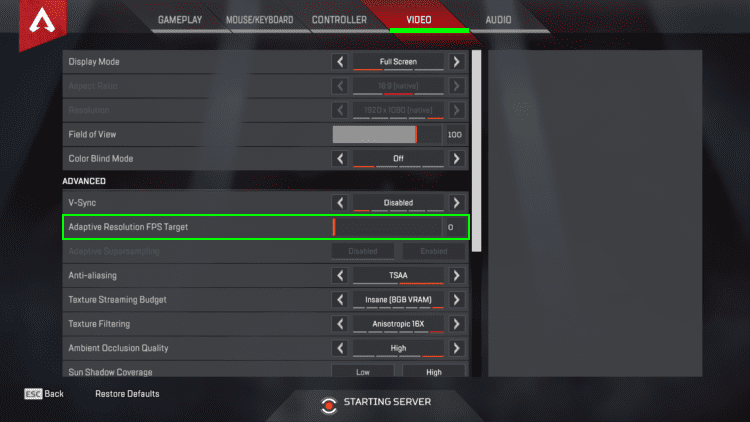 Once I disabled Adaptive Resolution FPS Target and Adaptive Supersampling and left everything at max, Apex Legends ran a solid, stable 60FPS no questions asked. That being said, Adaptive resolution only seems to cause issues on some machines. Whatever causes this, remains unknown. But! There is another underlying issue to address as well.

Check if Apex Legends Has a Memory/Cache Leak.

There is another major issue affecting Apex Legends frame rates and performance and it isn’t one that a lot of people have thought to check. Ram usage! If it wasn’t for the fact that my build is currently sporting a small system performance/statistic screen I probably wouldn’t have noticed myself.

When I first load into Apex Legends my system registers 36% Ram usage in total, and Apex usually only fluctuates between 35% and 39% during gameplay while holding a steady 60FPS. After each game has ended and I am returned to the lobby, Ram usage will increase a small amount, usually 5% or less.

Note: To check this on your own system minimise the game, open Task Manager take note of the Ram usage before your first game, then do the same after each game that you have played.

Since the issue compounds after each and every game, overall performance and FPS will drop little by little. The more ram you have, the longer it will take to notice, but eventually, your game will crash or become unplayable. (This usually happens around the 70-75% Ram usage mark) My build has 16gb of memory so it takes longer for the issue to appear. If you have less, you will notice the performance loss faster, possibly even after 1 or 2 games. 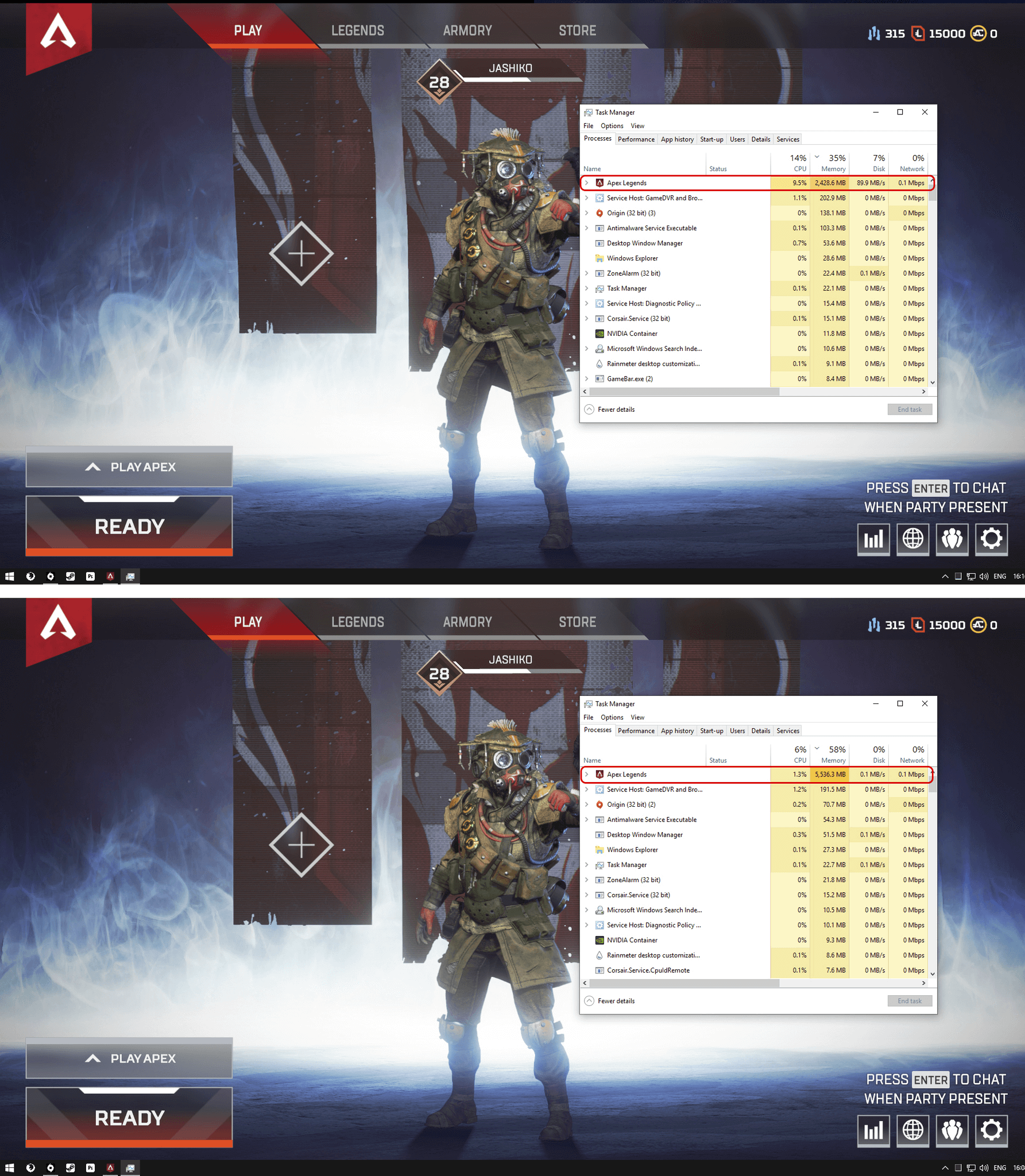 Once this happens, the only way to fix it is to Restart the game. After a fresh restart, the game will be back to its original ram usage amount. Although this isn’t the greatest fix or even a solution, it will allow you to play Apex Legends with proper performance, just with longer wait times between games because of the restart process. If this does fix your issue, please head on over to the EA Apex Legends Bug Page and upvote the issue I have created regarding this.

i keep getting huge frame drops in apex

why does my apex game get so frame

how to stop fps loss in apex xbox one xbox