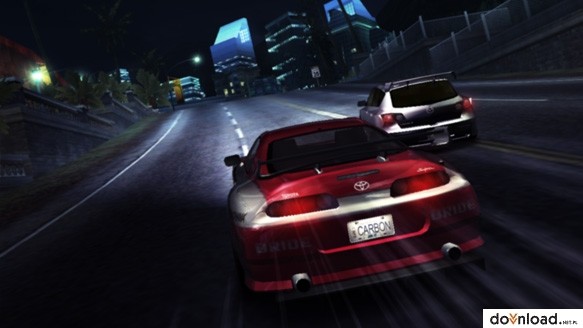 Need for Speed Carbon is the sequel of the best racing series. It got there, by constantly raising the stakes and keeping the users more than excited. Carbon is the last part, in which its developers have focused on illegal racings at night. This time, however, there were also references to older releases, so the game comprises the elements both from the Underground series as well as the Most Wanted. This version differentiates itself by touting its stunning effects and realism
The plot of the games is all about illegal and furious racings in the city. The main character returns to his home town of Palmont just to find out that gangs has taken control over the streets. Our job, as you might guess, will be to win races, unblock various areas of the city and take control over sectors occupied by competitors.

Since we have gangs and illegal racing, the game could not miss police officers trying catch our hero at all costs. From this point, you can see a reference to the Most Wanted, which focuses on police chases.

When compared to the previous series, this version empowers users with really great features. In the carbon, we can create our own team consisting of drivers and mechanics. We can employ different characters, where each of them has its strong points. The presence of specific characters is not just a cosmetic issue, as it gives us additional "skills", which we can use during the race. Thanks to this, you can ask your team to block a specific competitor or push him out of the route. There are many possibilities.

Of course, we cannot miss the well-known Need for Speed garages, where users can make modifications to their vehicles. Similar to the Underground series, it offers users the possibility to tune up the cars. There are both visual (color, spoilers, bumpers, wheels, graphics, lighting, colored lights) and mechanical modifications (engine upgrades, brakes, a nitro boosters, etc.). Users have three main cars to choose from, namely - a Chevy Camaro SS, Lamborghini Gallardo and a Mitsubishi Lancer Evolution IX. What is interesting about the Carbon, is the division of cars into categories - exotic, tuner and muscle. Each of these provides different types of vehicles that are performing its best in specific races. For example, American muscle cars are performing better on the straight roads, the Japanese tuner are well suited to drifts and exotic does well in races with multiple laps on the winding roads.

Worth noting is the fact, that it features both city and canyon racing environments. The appear of cutscenes starred by Shad Madson and Emmanuelle Vaugier can spice up your gaming experience. As in the previous versions of Need for Speed, the games contains rich collection of songs accompanied by artists such as Ladytron, Vitalic, Wolfmother, Yonderboi, Kyuss, and many others. 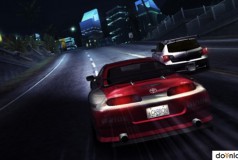