Windows 8.1 Preview is a beta version of a long-awaited Windows 8 update. This new release introduces numerous changes to the system, both in case of visual settings and technical details. These modifications have an effect on the desktop, the start screen, Modern UI interface applications, as well as improve multitasking and multithreading and allow to better manage multiple displays.

This new Windows 8.1 Preview aims at attracting more Windows 7 users who didn't like either Modern UI with its tiles or lack of Menu Start. At the same time, Microsoft is trying to keep the system as tablet-friendly as possible. The most awaited changes include: Menu Start button (though it takes you to Modern UI rather than displays an old-fashioned menu) that you can right-click on for fast shutdown, improvements to search engine,  and Windows' Internex Explorer in 11 version.

Be careful! This update is in its beta version, meaning that it may include many errors and imperfections. It should only be installed by advanced users. 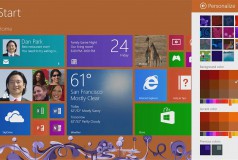 How to Get Microsoft Edge Chromium on Windows 8 and 7.

How to Delete Files Without Needing to Send Them to the Recycle Bin First.

How to Make Windows Automatically Create a System Restore Point at Startup. (Windows 7/8/10)